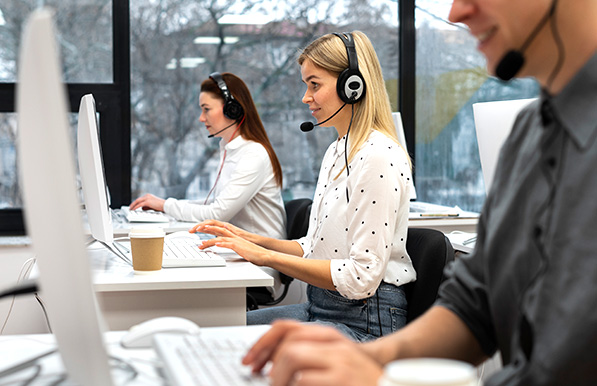 The UK Contact Centre Decision Makers Guide (DMG) 2022 highlights the latest trends in contact centres. Reviewing this year’s report, Rob Crutchington discusses the challenges of balancing customer service with ID verification to prevent fraud and how it continues to be a concern for organisations.

One of the notable findings cited in this year’s ContactBabel DMG report is that the average cost of an inbound call is £5.42 which represents 35% more than email and 78% more than webchat. What’s more, inbound calls to a live agent are still used by the majority (63.5%) of organisations for customer interactions, followed by those using email (17%) and webchat (6.8%). So why is voice still the preferred communication channel of choice?

While webchat may enable faster resolution for straightforward enquiries, there is no doubt that talking to an agent remains the gold standard of customer service. A significant proportion of customers want to speak to a person because they need help with online options, they have a complex issue or for the simple reassurance of personal contact. Many customers also believe that the security of speaking to a human can help to reduce fraud and identify theft. Some less ‘tech-savvy’ demographics simply prefer to talk.

A large part of the cost of a call for organisations is caller authentication. According to the latest DMG report, 63% of all calls require a security and identification process to be completed first, while a staggering 98% of calls were reported to be authenticated by agents. This means that organisations are spending a significant amount of time and money on agent-handled identity and verification (ID&V) checking.

The finance sector is an obvious target for fraud, yet in the survey the retail and utilities sectors also reported it as a problem. In fact, half of all large contact centres and 55% from small operations stated that they were concerned about external fraud, defined within the survey as the caller pretending to be another person.

Fraud prevention is high on the contact centre agenda, as is providing a great customer experience (CX). Providing personal service is an important way for organisations to reassure customers that they take security seriously, particularly when handling payments.

Fortunately, there are ways to use technology to help combat fraudulent activity, meet the required security regulations and provide gold standard customer service. Three examples are:

With pause and resume recording – enable contact centre agents to process card payments without being exposed to sensitive card data. This is still ranked highly and reported to be used by two thirds of organisations.

Using Agent Assisted Payments in conjunction with fraud risk management technology, such as Encoded’s patented Fraud Prevention Platform (FPP), an agent can advise the customer that additional identity validation is required and simply send a secure link (email or text). Once the customer acknowledges the link, the transaction is verified in the same way as a secure ecommerce payment from a trusted device. This smooths the CX process and helps to increase the number of transactions completed.

(or agent-assisted IVR) is viewed as a more customer-friendly approach, where the caller may have additional questions or the requirement for reassurance and confirmation after the payment process, perhaps around delivery times or other queries not related to the payment process. The DMG report showed this method is used by just over one-fifth of respondents.

Offers an alternative way for the customer to pay and is gaining traction as a self-service method of fraud reduction. The agent sends a secure payment link by email or text, which provides a pre-populated payment form for customers to complete payment. This relatively new method is now used by 13% of those who replied to the survey.

The contact centre remains a key customer touchpoint and an important frontline channel for customer enquiries and transactions. Business processes and metrics need to support this focus on customer service including balancing the ID&V question with CX. When choosing payment solutions it is important to meet customer service goals, as well as ensuring that critical processes are secure to reduce fraud, meet regulatory compliance and provide a great customer experience.